How to vote in the Gilston Area Neighbourhood Plan Referendum on May 27, 2021 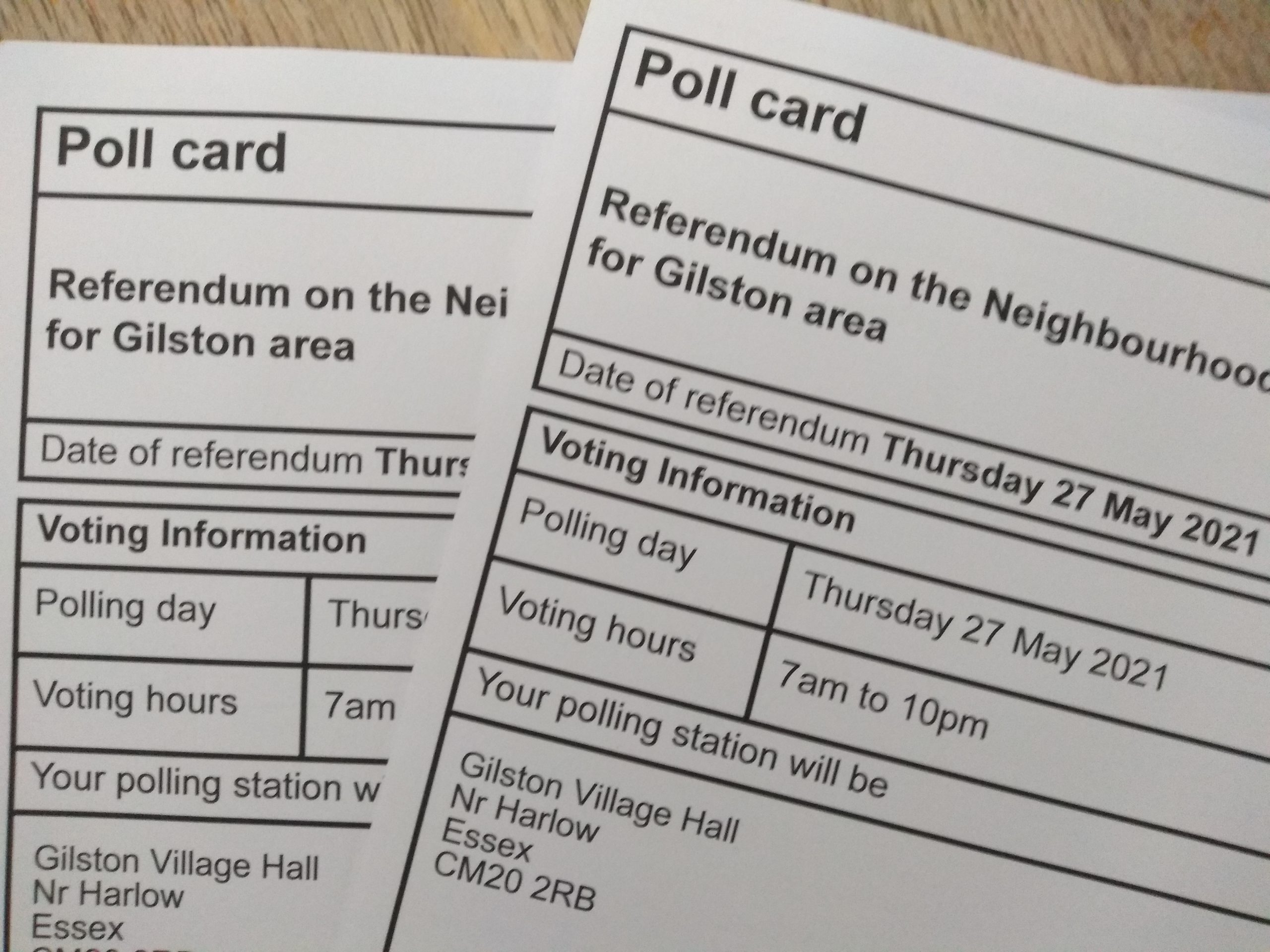 THE GILSTON AREA NEIGHBOURHOOD PLAN REFERENDUM TAKES PLACE ON MAY 27, 2021

We urge all residents of Hunsdon to VOTE YES by voting at your Village Hall in person on May 27, or using a postal vote.

This IS NOT a vote about whether you agree the housing development across the Gilston Area should be allowed. Residents sadly lost that fight back in 2018 when the Inspector at the Examination in Public agreed the East Herts District Plan could go ahead.

It IS a vote about whether East Herts Council and the developers must take account of the Policies within the Gilston Neighbourhood Plan, written in conjunction with residents of Hunsdon, Eastwick and Gilston over the last two years.

It’s critical that after two years work on the Gilston Area Neighbourhood Plan we get it over the final hurdle and not leave it all to the planners and developers to do whatever they want in our Neighbourhood.

With thousands of hours of work and your input, support and passion, the Gilston Area Neighbourhood Plan has been through a rigorous public process and will be adopted if the local community votes for it. You can read the plan at the Hunsdon, Eastwick and Gilston Neighbourhood Plan website.

The Referendum will be conducted by East Herts Council who will send you a Poll Card. If you want to check if you are eligible to vote, you can phone EHC electoral services on 01279 655261. The question – to which you’ll be able to answer YES or NO – reads:

Do you want East Hertfordshire District Council to use the Neighbourhood Plan for Gilston Area to help it decide planning applications in the neighbourhood area?

If more than 50% of voters say YES, the Plan will become a major planning document which East Herts Council will have to use in deciding on all future planning decisions in the Area covered by the Plan

Promoted and published by the Hunsdon, Eastwick and Gilston Neighbourhood Plan Group on behalf of the Parish Councils of Hunsdon and Eastwick & Gilston.

This site uses Akismet to reduce spam. Learn how your comment data is processed.

© 2021 Hunsdon.org.uk
We use cookies on our website to give you the most relevant experience by remembering your preferences and repeat visits. By clicking “Accept All”, you consent to the use of ALL the cookies. However, you may visit "Cookie Settings" to provide a controlled consent.
Cookie SettingsAccept All
Manage consent

This website uses cookies to improve your experience while you navigate through the website. Out of these, the cookies that are categorized as necessary are stored on your browser as they are essential for the working of basic functionalities of the website. We also use third-party cookies that help us analyze and understand how you use this website. These cookies will be stored in your browser only with your consent. You also have the option to opt-out of these cookies. But opting out of some of these cookies may affect your browsing experience.
Necessary Always Enabled
Necessary cookies are absolutely essential for the website to function properly. This category only includes cookies that ensures basic functionalities and security features of the website. These cookies do not store any personal information.
Non-necessary
Any cookies that may not be particularly necessary for the website to function and is used specifically to collect user personal data via analytics, ads, other embedded contents are termed as non-necessary cookies. It is mandatory to procure user consent prior to running these cookies on your website.
SAVE & ACCEPT